Deciding whether or not to use a pen name is just one of many choices writers have to make when preparing to publish. It’s an easier decision for some than for others.

Two years ago I published This New Mountain under the pen name Cate Macabe. I had never intended to write a memoir (not mine or that of a private detective/grandmother), but from the start of that journey I knew I would use a pseudonym. My reasons were simple: 1) I write science fiction and fantasy, and I didn’t want to confuse future readers who might someday search for my other work; and 2) my writing style is significantly different for the memoir and my speculative fiction.

If you’re not sure taking on a pen name is right for you and your writing, here are ten reasons in favor of using one, followed by possible complications if you do.

Why to Use a Pen Name

Choosing to use a pen name is a decision that should be made carefully, knowing it will add complications to your life (and deciding which one to use is even more complex). Rachelle Gardner, author/blogger/editor, gives this advice for those considering using a pen name:

We’re not going to completely get away from pseudonyms, since there are real reasons people use them. However, for now I’d say, only use [a pen name] if it’s crucial – if there’s no other way. And if you use one – it’s best to use only one name in your online presence – website, blog, Facebook, Twitter. Just inhabit that name and become it.

If you’d like to find out which authors use a pseudonym, go to this site for a comprehensive list.

Have you thought of using a pen name? Do you already use one for your writing or an online presence?

In many cases, using a fake name is considered illegal or at least dishonest. But doing so is a common practice among artists like actors, musicians, and writers. 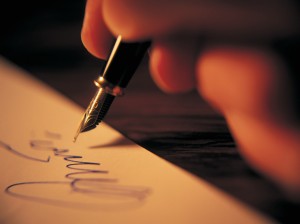 Famous authors have used pen names for different reasons for hundreds of years (if not longer). There was a time when women writers weren’t taken as seriously as men, so they often assumed men’s names if they wanted to be published. Sometimes an author used a different name for political reasons, like not wanting to be imprisoned by a particular government (French philosopher Francois Marie Arouet wrote as Voltaire). Stephen King’s early publishers didn’t want to saturate the market with too many of his books, but King wanted to keep publishing so he wrote under the name Richard Bachman.

Other good reasons to use a pen name include: the author doesn’t like their real name; the name doesn’t fit the genre the author writes in (female names sell better in romance, male names in business books); and separation of an author’s works when writing in more than one genre.

This last is one of the main reasons I chose to use a pen name for This New Mountain. I don’t plan to write another memoir, but I do hope to have my science fiction and fantasy work see publication. When it comes time for that, I’ll use my married name, KL Wagoner. But I don’t want future readers to think This New Mountain is anything other than a memoir, and so I took into consideration my later plans for publication.

There is one more reason I chose a pen name – the writing style for AJ Jackson’s memoir is very different from any of my other work. See my earlier post on the voice of the memoir. Again, I don’t want readers to get confused in the future.

The process for choosing a pen name can vary even more than the reasons for using one. Some authors simply take the initials of their first and middle names and add them to their last name (Joanne Kathleen Rowling aka JK Rowling). Others use the name of a relative, a friend, a pet or a combination of any or all. Maps are a great place to find a pen name, as well as characters from favorite books. But a pen name should be chosen as carefully as choosing the name of a character. The author of a crime novel won’t pick a silly, girly name and the writer of chic lit won’t choose an uppity sounding one.

As a child, I accepted my maiden name because it belonged to my father and I didn’t have a choice, but it wasn’t long before I learned that having a last name that rhymed with tick, lick, etc. (a fact which silly boys couldn’t help remind me of on a regular basis) had its disadvantages. So using my maiden name was definitely not on my list of favorites.

For Cate Macabe, I picked a variation of my real first name. As far as the last name, I’ve loved the sound of it ever since being introduced to someone years ago with the same name. I even have a character named McCabe in one of my unpublished novels.

Settling on the spelling of my pen name took careful consideration as well. In researching, I discovered dozens of Kate McCabe’s around the world, including artists, actors, and a published author. To simplify things, I decided on a different spelling. Changing the name at the last minute from Kate McCabe to Cate Macabe caused headaches for my publisher, but a certain amount of flexibility is one advantage to being associated with a small, traditional publisher (and for this, Casa de Snapdragon deserves a big, gold star).

There is a chance I will sign the wrong name one day if someone asks for an autograph. And I might stare blankly for a moment at a person who uses my pen name in conversation with me. Maybe neither of these scenarios will come to pass if I practice my signature and try to get comfortable with being…[cue loud and inspiring music] Cate Macabe, Author.

If you had the chance to choose a new name, what would it be?

Courage is not the absence of fear, but rather the judgment that something else is more important than fear. ~ Ambrose Redmoon 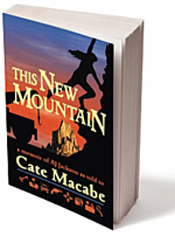 Where to Buy The Book