This summer I stumbled upon the Hoodoos (but not true pinnacle-type geologic hoodoos), “overturned, topsy-turvy” boulders covering about one square mile of Yellowstone National Park.

If there had never been a heaving up and throwing down of a once unbreakable mountain, the seed would never have found a place to cling. If the crack had been too narrow or too wide, it would have found a different path. If the sky had not sent just enough tears to sustain, if the sun beat too cruel and the winters clung too long, the seed would never have sprouted or survived.

If I had passed by with no desire to slow and return, I would not have stood, awed, by the jumble of rock and time. And without moving closer to see, I would never have noticed the tree whose trunk – the same color as the stone – grew out from the crack, over and around, then straight toward the sky.

I have wondered at a flower growing in the crack of a sidewalk, or on the jagged edge of a cliff, but this was different. This was a tree that had grown from a seed, against all if-then’s, everything coming together “just enough” year after year. But I knew it wasn’t chance that had brought it all together and placed it in such a place. 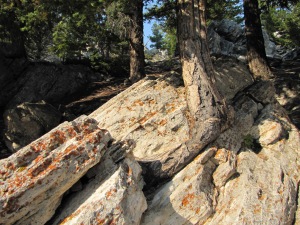 Though many had most certainly seen it before, at that particular moment it was just for me. This tree, once a seed, caught in the rumble and tumble of a broke-apart mountain, had been placed there for me to contemplate. Resiliency in nature. Beauty amid destruction. Life from death. Perhaps to show there is purpose in tumble-down places. And to marvel at the hand that made them.

Have you found the purpose to your tumble-down places?