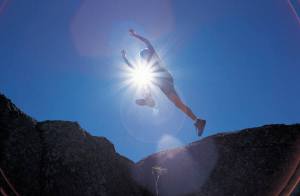 I’m presently in the throes of NaNoWriMo (National Novel Writing Month) – along with over 250,000 people worldwide. In case you haven’t heard of NaNo, it’s “thirty days of literary abandon” where insane people commit to writing a 50,000 word novel in one month (that being November). Besides the obvious hurdles this kind of commitment will throw in many people’s paths – finding the time to write 1,667 words per day (especially with a job or school schedule), doing everyday chores (laundry, housework, bathroom visitation), cooking for the family, taking care of children, running errands and shopping, spending time with friends/significant others, sleeping – there is one major hurdle to contend with first.

But “hurdle” isn’t even the right word to describe this other barrier – it’s not the same kind of frame-like structure that a runner has to jump over but is easily kicked down. It’s not even a wall. It’s the mountain of the first step. Excuses are the foothills, they should be the easy part to overcome, but we often make them the hardest: I don’t have enough time or what if I can’t make it work or what if I’m not smart enough, and so on. What it all adds up to – this mountain, this dragon – is fear.

On the field of the self stands a knight and a dragon. You are the knight. Resistance is the dragon. The battle must be fought anew every day. ~ Steven Pressfield

By the end of today, I expect to have a total of 30,000 words toward my 50K goal. And because of my commitment (which many nights has left me asleep at the keyboard after midnight) and the sacrifice of all kinds of things for the cause, I’ll have the bones of a novel when November 30th rolls around. This first draft will need months of editing, revising, and rewriting. It will take a lot more work to finish…but I don’t want to think about that right now. I still have two weeks left that need my chained-to-the-keyboard-and-no-editing attention. I have to focus on this one step (broken into smaller 30-day bites) toward the greater goal of publishing the novel that this manuscript will someday become.

If I hadn’t pushed through all my what-ifs and decided to step up and give this everything I had, I wouldn’t be feeling pretty good about my writing goals right now. Life has a way of tossing obstacles in my path, things that can throw me completely off course. If for some reason I don’t make my NaNo goal by the end of the month, I will still be closer to finishing my first draft than if I hadn’t started at all. No matter what, I will have established a writing routine, and proved to myself that I can do what I set my mind on. And I’ll have a good start going into the new year.

We often let our fears and our excuses get in the way of even starting a thing. The first step toward doing something worthwhile can be the hardest to take, but it can also lead to all kinds of unexpected rewards along the way.